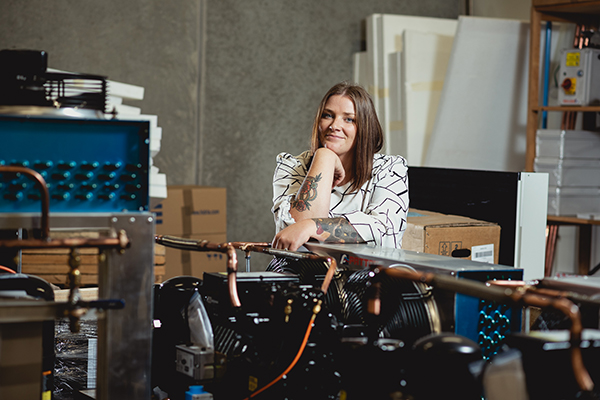 After deciding that school was no longer the place for her, Megan went home and told her father that she was not going back. He responded by telling her, in no uncertain terms, that she could not live under his roof if she wasn’t either at school or working.  “I just replied by saying ‘fine, I’ll go and work for my uncle then,” she laughs.

Much to Megan’s disgust, at the time, her father took it upon himself to set up a two-week trial with her uncle’s refrigeration business, which would end up marking the beginning of an apprenticeship, which would, in turn, open the door to an incredibly promising future.

The Whangārei-based refrigeration business was home to a wide range of refrigeration equipment; from ammonia to refrigerated trucks and large cool stores to domestic appliances and Megan was expected to hit the ground running from day one.

Initially, she was unsure if this was the trajectory that she wanted her life to take, but it wasn’t long before she began to enjoy the constant challenges thrown at her, and make use of her natural mechanical aptitude.

One of five children, Megan wasn’t the type to sit on her laurels.  She had learned from both of her parents (and her wider family) the importance of hard work. “My mum is hands-down the strongest woman I will ever know. She has five children, all with very strong personalities and had some major curve balls thrown at her in life.  Even so, she still has enjoyed an exceptionally successful career and always has a positive outlook, no matter how tough her day has been.”

Inspired by the work she was doing, Megan decided that once she had completed her apprenticeship, she would move down south, from her home up north, to Hamilton, “I didn’t want to get too comfortable and felt it was important to learn more about the trade from other perspectives.”

Her role in the Waikato gave her a real appreciation for the refrigeration element of her qualifications, which she chose to pursue in further detail. “Even on the slower days, you’re still learning more about the industry. It is a huge learning curve and there are lots of intelligent people in the business who specialise in certain areas. We are all always learning and upskilling.”

As one of only seven New Zealand women with this type of qualification, It didn’t take long for Megan to come across a bit of push back from a select few. “You often feel you have to prove yourself to every single person you work with. Sexism is still very much prevalent which is disappointing, but on the flip side of that I have met some incredibly supportive people who I will forever be thankful to and who I will always refer to as my friends.”

In order to keep working up the ladder, she has found it is important to be fairly thick skinned “it makes it all the more satisfying when you do succeed.”

After a few years in the industry, she began working in supermarket refrigeration for a reputable company, and then furthered her experience with another large supermarket supplier, working with transcritical CO2 refrigeration, commissioning supermarket racks and gaining valuable hands on experience with controls and different systems. This included carrying out usual service-tech duties, as well as fully commissioning transcritical CO2 plants, cabinets and controllers, including RDM, Emerson and Carel.

At the beginning of this year, Megan moved on to become a sales engineer with Patton in Auckland. “Since transitioning from a service engineer to a sales engineer, I spend time in the  office part time, building customer relationships, doing quotes for clients, and I also get the chance to go out on the road and visit clients to ensure we are keeping up with their needs,” she says.

Her new role has given the mum of two a chance to spend more time with her husband and their twin sons at their home in Hillsborough. “Life is pretty much hectic from morning to night for both of us. We have two four-year-old boys who keep me on my toes and my eyelids open in the middle of the night.”

Working as a service tech, she found the work/life balance harder to keep on top of, “being part of an on call roster and doing supermarket refrigeration takes a lot of your spare time (and energy)”.  In her current role, “I am able to go home, put my phone down, spend time with my family and actually wind down. The work life balance is pretty much perfect right now.”

Megan has recently decided to add to her work load by studying towards a Bachelor of Business, extramurally, via Massey University. “I don’t like to stay stagnant and always believe in upskilling,” she says.

“I've been in the industry for 12 years now, and love the variety this work brings. There are so many opportunities to advance within this industry, whether it be on the tools or in an office type role. You can never know everything about this trade which makes it all the more exciting.”

Forward thinking and always looking at the bigger picture, Megan believes that refrigeration has  a promising future, with the potential for improvement. “We are already moving into more sustainable and eco friendly options, and technology is waiting for no one. We will be licenced in the near future, which is a huge step in the right direction to getting the recognition the industry deserves. The possibilities of what our industry could do, moving forward, are endless and all I can really say is I am looking forward to being a part of some of those upcoming changes.”

Managing Director of Patton Refrigeration (a Beijer Ref company), Philip Hitchins, has followed Megan’s journey into the trade with interest.

As a wholesaler supplier we would see Megan on a regular basis. I was impressed with Megan’s drive, work ethic and directness. When an opportunity arose at Patton and Megan applied it was the beginning of a new chapter in Megan’s journey and a welcome addition to the branch team.

Alddon Mackay, Patton Auckland Branch Manager adds: “Megan brings to us an ideal combination of both general and specialist CO2 knowledge as well as a great work ethic. She has fit in seamlessly and we are all very pleased to have the opportunity to welcome her to the Patton team.”

In the short time she has been with Patton, she has felt welcomed and supported by her colleagues and appreciates the support she has received. “I feel totally at home in this company thanks to the people I work with.”

Sign up to receive news and offers from Patton